Tomatoes with a Juicy Past

Some heirloom tomatoes date back to The Great Depression when a satisfying meal consisted of sliced tomatoes, bread and a dollop of fresh cream from the top of the milk pail. Today, we enjoy the nostalgic fruits for their juicy goodness and old-fashioned tomato flavor. The “life stories” around the origins of various heirlooms are as rich in heritage as are the tomatoes. For instance, take the variety “Radiator Charlie’s Mortgage Lifter”.

In the 30’s Charlie Byles, a radiator mechanic from Logan, West Virginia, thought he could feed more families if he could grow larger tomatoes. Charlie cross-pollinated the largest tomatoes he could find, and six years later, he hit on a winner. Charlie’s tomato became so popular people drove for miles to purchase his seedlings for one dollar each. That’s equivalent to $16.70 today. After six years of selling his tomato plants, Radiator Charlie paid off his mortgage. And today, we still plant his tomato.

Heirloom varieties are open-pollinated—meaning that unlike hybrids, the seeds from one year will produce plants with most of the characteristics of the parent plant the next year. This means that year after year the varieties’ strongest traits survive and begin to adapt to local climates, naturally resisting local diseases and insects, all while reducing the need for pesticides.

Commercial food companies developed hybrid varieties to increase production, breed out diseases and to grow more uniform sizes. These hybrid varieties won’t reproduce and when compared to an heirloom tomato can have less taste.

Many heirloom seeds were preserved and handed down through the generations, hence the name heirloom. Others travelled from Russia, Italy, Japan, France and Germany. Heirloom tomatoes come in many odd shapes with grooves, bumps and some even have faces. Color-wise they can be anything from pink, blackish-purple, chocolate brown, to even white.

Heirlooms tend to yield fewer fruits than hybrids, they’re fragile, and their shelf life is short. The fruit needs to be stored at room temperature, and should be used quickly. That said, heirloom tomatoes are much more interesting than hybrid tomatoes when it comes to taste because heirlooms vary in flavor from lemony to sugary sweet.

And, they taste like something your grandmother would have prepared!

For more information on organic gardening or heirloom tomatoes, get in touch with us today either through our Facebook page or our website. 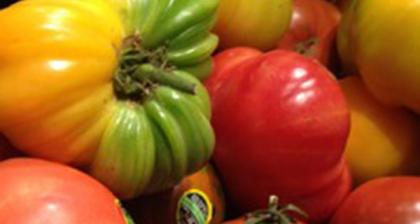 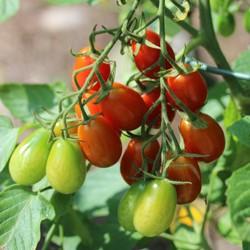 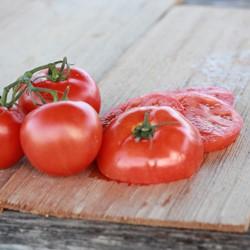