First, understand there are primarily two types of weed controls.

Weed and Feed products are popular in the spring. So, why do we talk about them in mid-summer?

Because there’s a second crop of weed seeds on the way—fall weeds. Controlling fall weeds helps reduce the weed population next spring and in subsequent seasons. Our organic solution for pre-emergent weed control is corn gluten, a by-product of corn. Corn gluten interferes with the seed’s ability to germinate and form roots, rendering the seed unviable.

Applying a product like Natural Alternative® 10-0-0 with corn gluten in late July or early August feeds the lawn without burning the grass as synthetic fertilizers may do in hot, drought-prone summer months; and it acts as an organic herbicide (weed control), controlling 50 to 60 percent of weed seeds when applied at 20 pounds per 1,000 square feet. For crabgrass control, at least 12 pounds per 1,000 square feet is recommended.

If rain does not occur within five days of the application, water the area with a quarter to half inch of water. This will help “activate” the corn gluten for weed control.

Whether you attack weeds before they grow or after they’ve appeared, always use an organic solution to reduce the use of chemicals in and around your home. It’s an easy choice™. 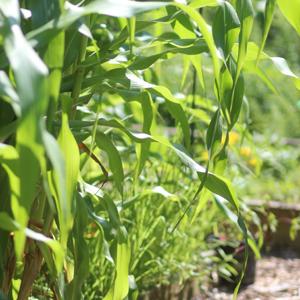