The Importance of Pest Control

Protect your property from the dangers of pests.

Pests can pose dangers to your loved ones and pets. Female mosquitoes must feed on the blood of hosts, including humans, in order to lay their eggs. When drawing blood, mosquitoes introduce their saliva to the host, potentially transmitting diseases.

Fleas are difficult to eliminate when they’re brought into a home by a pet, and can transmit typhus, plague, and allergen particles. Use Natural Alternative® Organic Mosquito, Tick & Flea Control to protect your property from the dangers of disease-carrying pests.

Grubs are juvenile beetles which hatch and mature under soil. As grubs grow, they consume fine plant roots and other organic matter needed for your lawn and garden. Japanese beetle grubs are prevalent in the eastern United States and pose some of the most damage to turfgrass, eating the root systems needed to adequately uptake water.

Grub damage is visible on the surface, causing wilted, dead, or dying turf during spring and fall. To decrease grub damage to your lawn, use grubGONE!®, a granular, bio-insecticide formulated to control turf grubs without side effects or damage to beneficial insects. Apply grubGONE!® from April to late June, and again from the end of August until the beginning of October for best results.

When grubs mature to beetles, the damage caused by these insects occurs above ground. Beetles attack the leaves of vegetables, flowers, fruit, trees and other plants, leaving visible damage to gardens and ornamental plants. Beetles often feed in small groups, decimating plants quickly by "skeletonizing" leaves, leaving only the veins to remain. For adult beetle control, apply beetleGone® to trees, shrubs, edible fruits and vegetables from June until the beginning of August. 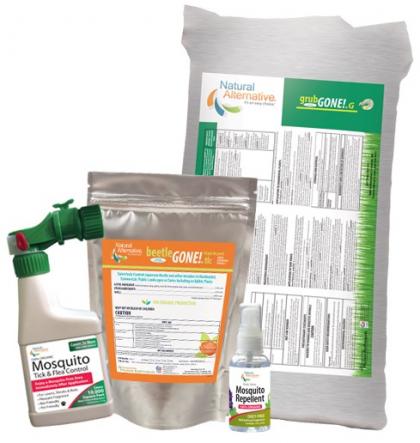